admin_yamaki Posted in My favorite restaurant in New York — No Comments ↓

Many years ago, one of my French friend took me this restaurant, and after that, it became one of my favorite restaurant.

Please try La Soupe à l’Oignon or French Onion Soup as it is known in the U.S.

Included are bread, salad and dessert for $22.

Look at the golden brown Gruyère cheese melted on top! 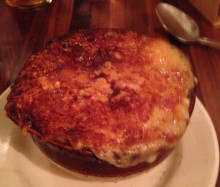 Beneath the cheese and the toasted French bread is hot onion soup.

It’s the most delicious French onion soup I have ever had.

Posted in My favorite restaurant in New York

If dialed from Japan, local charges from home and mobile phone apply.

How to get started: